Jacks or Better: Oldest and most popular video poker

Extremely popular even nowadays, Jacks or Better is the oldest videopoker variation found at online casinos. It first appeared as early as in the 70s of the last century. Despite its respectable age, this card game is still holding its position among online casino clients.

Jacks or Better: story of success

In the very first video poker machines, winnings were paid for two pairs and higher. Low winning chances discouraged players, which resulted in a sharp drop in Jacks or Better popularity. This has led to casino software developers making concessions. They had to make the game more player-friendly and profitable.

Now Jacks or Better features a higher probability of winning and adjusted payouts system. Winnings are starting from Jacks and higher. This is how the game was given its name. 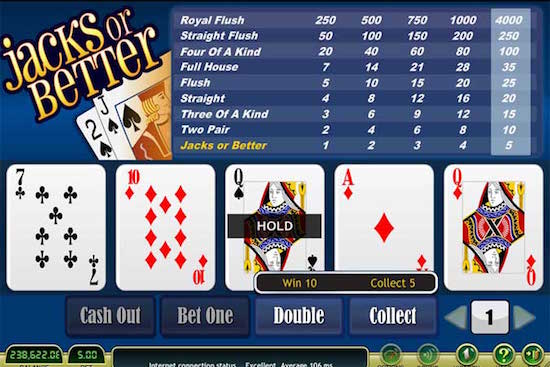 Players responded to the adjustments with renewed interest in Jacks or Better. This video poker conquered the hearts of gambling community worldwide and gained a foothold in the online casino industry.

Nowadays with its popularity peaking, Jacks or Better features a growing number of versions. One of the best things about Jacks or Better is a low casino advantage at 0.5% tops. However, this won’t ensure you against costly mistakes. To make profits on Jacks or Better, you need to be armed with a savvy video poker strategy.