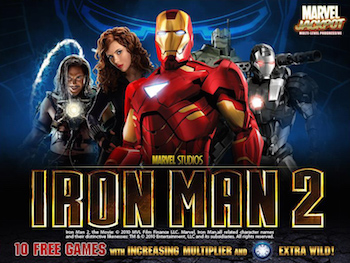 The  whole world knows about the deeds of the famous Iron Man. Most of you must have seen the Hollywood movies featuring that character. It’s no surprise that the developers from Playtech software company got interested in that popular theme. They gave us a unique opportunity to enjoy playing the exciting Iron Man 2 slot.

It should be noted that Iron Man 2 slot is a worthy and interesting sequel to the first part – Iron Man slot. The sequel features a more exciting and unexpected plot: Iron Man’s courageous friends join in to help him fight dangerous enemies and evil forces, as well as compete for generous prizes. Another new feature that you won’t find in the previous game: six symbols are located on two paylines.

Immersing into the world of new emotions with Iron Man

Decided to play Iron Man 2 for free? You should get to know the slot’s main symbols and the movie’s three leading characters. 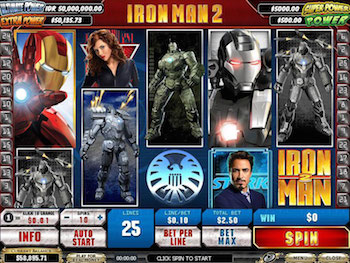 Six robot symbols are particularly interesting and original. Besides, you can come across one Scatter symbol and two Wild symbols.

The sequel game offers a very pleasant and beneficial surprise – as many as four Marvel jackpots. Progressive jackpot game is launched randomly, i.e. it may start after any spin. The player stands a pretty good chance of snatching an impressive sum of thousands of crispy green bills.

Three or more symbols with Iron Man’s logo (Scatters) activate 10 free spins. Free spins start with a x2 multiplier which increases up to x3. Trying on the role of Iron Man is a truly unforgettable experience!