Beetle Bingo game, manufactured by the world-known Playtech company, combines the elements of the traditional bingo and scratch cards. In addition, it has an entertaining and original plot and graphics. For example, instead of balls it uses colorful lady-bugs (with numbers on them) that are let out of the jar at the beginning of the game.

This is a very exciting and original game recommended to all players that love new experiences.

Beetle Bingo is a free entertaining game from Playtech casino software manufacturer. The bets vary from 50 cents to €10 (in William Hill Casino). The player’s task is to get a card whose numbers are winning according to one of the three criteria. The payout is calculated as follows: the card’s nominal is multiplied by a random multiplier of a winning group of numbers.

Beetle Bingo game has numbers from one to ninety. Fifteen numbers are winnings ones. The card includes three positions, with five numbers in each. Beatle Bingo gives you the opportunity to win up to half a million dollars. 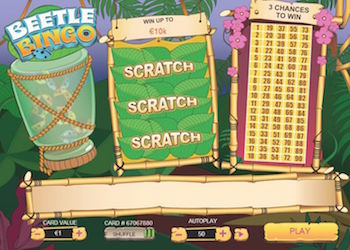 On the Beetle Bingo screen, you can see a jar with beetles, a card with a protective coat, a table with all numbers, and another card onto which the numbered beetles are crawling. The control panel located in the lower part of the screen has few buttons, so it is not in the least confusing for the player.

Beetle Bingo is a funny and entertaining game that reminds the players of bingo and scratch cards. Of course, you will be bored to play it in the demo mode for a long time. Do not hesitate to start making real-money bets – and the game will become very exciting.

You can try out the wonderful Bingo Beetle game at William Hill Casino or any other large and respectable online casino running on Playtech software.