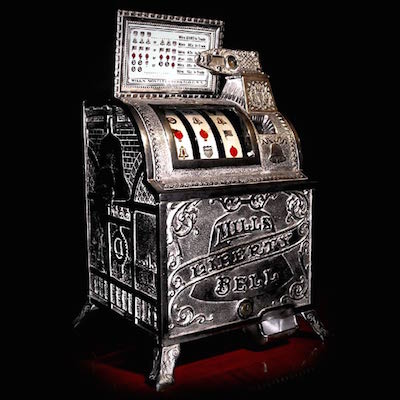 The very first slots were devices with three or more reels with symbols on them. As back then there were no buttons, you had to press a handle to make the reels rotate. That is why slot machines were called “one-handed bandits.” Today, a lot of slots still have handles that, however, often are merely decorative.

The first “one-handed bandit” was invented in San-Francisco by Charles Fey. Historians still argue about the date – some say that it happened in 1895, while others state that in 1887. Anyway, the first slot looked unlike any modern slot: it was a simple device with only three reels and several symbols – horse-shoes, spade, heart, and bell of freedom. The last and the main symbol gave the slot its name – Bell of Freedom.

As the slot had only three reels, it was very easy to calculate the winnings. The player who hit three Bells of Freedom, won maximum amount (jackpot).

The slot was a break-through in the gambling industry. Although gambling and slot machines were banned in most American states, lots of people wanted to try it. The popular invention faced challenges, too: it was copied by other people. So in 1907 Gerbert Mills invented a new slot called Operator Bell. By 1908, the world saw quite a number of different slots machines.

Soon slot machines spread all over the world. It’s interesting to note that some gave winnings not In money but in bubble gums, chocolates, and so on.

The first fully electromechanical slot was manufactured in 1963 by Bally company. The slot whose name was Money Honey could automatically pay up to 500 coins. In the next couple of years, the total number of slots in the USA reached whopping 10,000 .

1976 was the year of another break-through in slot industry: Trinitron company was the first to invent a video slot with a 19-inch screen. After slight improvements, it was installed in Las Vegas Hilton Hotel. A few users later, Trinitron was acquired by IGT which became one of the world leading manufacturers of gambling hardware and software. Among its clients, it has the largest casinos in Las-Vegas, Monaco, and Macao.

The first bonus slot game saw the world in 1996, when WMS Industries presented its video slots, with the most popular one called Reel ‘Em In. However, some argue that the first bonus game was created in Australia in 1994.

With the global spreading of the Internet, online slots became an integral part of gambling world. With the first online casino launched in 1995, gamblers all over the world got the opportunity to play not only in Las Vegas, but on the Internet, too. Nowadays, dozens of millions of people enjoy playing video slots every day. The slot industry is progressing, and game quality is constantly improving.